Alexander Sorloth’s transfer to Crystal Palace has left a mark on Danish football.

That Palace hold Danish football in such high regard to identify a striker there, and then pay what was considered in Denmark to be a surprisingly high price for him, has given others hope.

They include Sorloth’s brief FC Midtjylland teammate Erik Sviatchenko. The Celtic owned player arrived at the Danish club in January, not long before Sorloth left for Crystal Palace, and he shares the aim of a move to the Premier League.

It’s going to be a big ask, Brendan Rodgers found Sviatchenko to be surplus to requirements at Celtic Park, but given there are Premier League eyes on FC Midtjylland, there’s certainly a chance.

Speaking to Jyllands Posten, Sviatchenko explained: “Alexander Sorloth is a good example of what can happen in half a year. I’m not saying I’m going to do a Sorloth. I’m just saying it’s not such a big step from here to the big stage.

“Midtjylland will help me, as I will help them. We must make sure that I’m in the best way come the summer.” 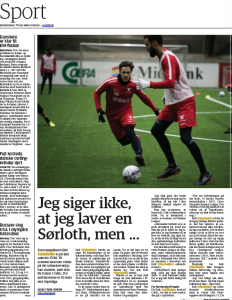 Sviatchenko also has World Cup aims, which were largely behind his return to Denmark from Celtic and the Scottish Premiership. Should he manage to get in the Danish squad and make an appearance then that would also help his transfer aims.

At this stage it seems unlikely he’ll be heading back to Celtic, especially given that Rodgers doesn’t look like he’s going anywhere.

Perhaps Sviatchenko can catch the eye of the same Crystal Palace scout who recommended Sorloth.