With the Portuguese media becoming aware that Celtic interest in Benfica youngster Paulo Bernardo has been reported in the Scottish press, we get to see a response to that rumour today.

It was claimed in the past few days that the Hoops would like to land the 20-year-old in a similar deal to how they signed Diogo Jota, who first moved on loan and can now be signed via a buying option.

Celtic fans should perhaps calm any excitement about this possibility, because when commenting on the story, newspaper A Bola writes this is not happening for now.

The outlet claims there’s not ‘any kind of negotiation’ between Benfica and Celtic at this stage, adding that the youngster is expected to be in Roger Schmidt’s squad for preseason. 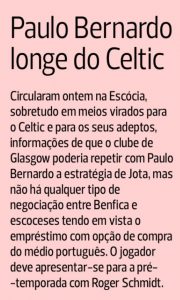 Paulo Bernardo is another product of Benfica’s youth ranks and made his debut for the first team this season. The midfielder made 24 appearances in his first year, and is slowly gaining importance in the Eagles’ squad. Protected by a €100m release clause, the Lisbon side know he’s very well protected from foreign interest.

Regarding Jota, it’s getting rare to see the Portuguese media speaking of him these days, as they’re expecting Celtic to agree personal terms with him and confirm the buying option to land him permanently.