It doesn’t matter how many times Milan come knocking for Kristoffer Ajer, it appears Celtic are not interested in letting their defender go.

The Norwegian has been a long-standing target for the Serie A side, and although he’s not top of their list, with those spots reserved for either Wesley Fofana or Nikola Milenković, the 22-year-old remains an option for Paolo Maldini and Frederic Massara.

However, the only way those in charge at Parkhead would let him leave is if Milan slapped down €20m on the table, according to Corriere dello Sport, which the Italians aren’t prepared to do yet.

Their favoured approach would be a loan for Ajer, but Celtic have said ‘no’ to that, and it’s ‘difficult’ to imagine the Milan board putting the money on the table. 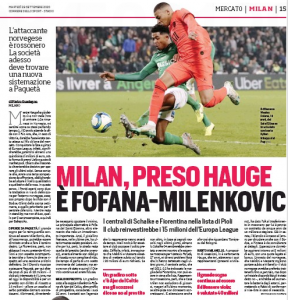 He’s currently ‘a step below’ Fofana and Milenković, and it could very well be that the inability to get either of those names forces Milan’s hand to meet the requests of Neil Lennon’s side in the dying moments of the window, but for now, that’s not going to happen.

Celtic fans wanting Ajer to stay should be able to sleep tightly for the next few nights, at least.