After defeat to Rangers over the weekend, it’s fair to say that things are a little bit glum at Celtic at the moment. Steven Gerrard’s side won 2-0, thanks to a brace from Connor Goldson.

The Scottish Premiership champions are not having a good time of it under Neil Lennon at the moment, and the pressure is very much on to turn things around.

The return of the Europa League could help that, with AC Milan, their biggest competition in Group H, arriving for the start of the group stages on Thursday.

That game has been previewed by Gazzetta Dello Sport today and they very much present Celtic as a club in crisis, using the Rangers match as a basis for that.

They explain that Milan will face a Celtic side ‘injured’ by their defeat in the derby and ‘poisoned by controversy’ after Lennon claimed his team-sheet had been leaked.

These two things have ‘opened deep cracks’ in the environment at Celtic Park, where the expected goal is another title.

The newspaper says that losing to Rangers always ‘leaves deep marks’ at Celtic but this one has hurt more because, while Gerrard has introduced a modern style at Ibrox, Lennon’s 3-5-2 is ‘under indictment’. 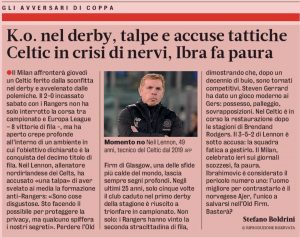 This is all a significant plus for Milan, who are in good form themselves and described as ‘scary’, with veteran Zlatan Ibrahimovic the number one danger.

The ‘best man’ to counter that, they argue, is Kristoffer Ajer, who they say was the only Celtic player to come out of the Rangers match with any credit.

All in all, Celtic’s situation is presented as extremely grim with a growing belief in Italy that Milan should roll over them in Thursday’s game.