Home Europe Celtic hope to ‘take over’ for PL defender, other club has already...
SHARE

Turkish newspaper Hurriyet reported on Wednesday that Galatasaray had agreed personal terms with Manchester City defender Jason Denayer and Fatih Terim’s side are now closing in on the Belgium international.

The same report also mentioned the centre-back had offers from Celtic and Leeds United, but he turned it down in order to return to the Türk Telekom Stadium, where he spent last season on loan.

Het Nieuwsblad now claims that Brendan Rodgers’ side are still in the race to sign the player. The Bhoys remain hopeful to ‘take over’ the 23-year-old from the Premier League champions to strengthen their squad.

The report also talks about interest from Galatasaray and have made a bid of €3m to sign him on a permanent transfer. The Turkish club ‘could not provide any guarantees’, which could be to do with the regular playing time. Torino are also interested, but the Serie A club failed to meet the conditions for the transfer. 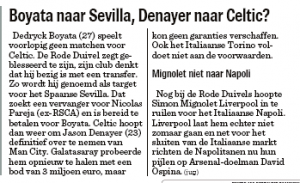 Sevilla are interested in Celtic’s Dedryck Boyata and if the Scottish club allow him to leave, they could replace him with Denayer, provided they manage to secure his services.