Jozef Vengloš managed Celtic for one season during the 1998/99 campaign and the Bhoys lost the title and Scottish Cup to Rangers that term.

Vengloš stepped down as the coach after one season and will be remembered by the Celtic supporters for bringing fan favourite Ľubomír Moravčík to the club.

The former midfielder has given a lengthy interview to Czech newspaper Mladá fronta Dnes, where the large focus has been his time at Celtic.

Moravčík arrived at the Scottish side at 33 years of age and there were hardly any expectations of him to do well at the club. However, he was successful in changing the opinion of Celtic fans.

“It was written that a loser had arrived. That coach Vengloš brought his son and threw away 300,000 pounds for him. I wiped out everyone’s doubts. They thought I was going to shut up, but then Celtic bowed to me,” he said.

The Slovak arrived at Celtic from MSV Duisburg, where he was not enjoying life. He didn’t speak English when he arrived in the UK, which in a way, played to his advantage.

When asked if it bothered him that they didn’t trust him in Scotland initially, he said: “No, I had no idea, I couldn’t speak English. It was a fateful time for me. In Duisburg I suffered, I went on strike.

“He [Vengloš] was looking for a midfielder at Celtic, who isn’t scared, gives away the ball and also shoots.”

Moravčík’s first two goals for Celtic came in their 5-1 victory over Rangers in November 1998. He spoke about his performances against the Gers and also his experience of sharing the dressing room with Henrik Larsson.

“I’ve assisted Henrik Larsson’s goal against Dundee before, but when you decide the derby, you have the fans taken care of for the rest of your life. You are a magician,” he added.

“I won’t forget standing in the middle of that green and white cauldron: You can never play badly for sixty thousand people!” 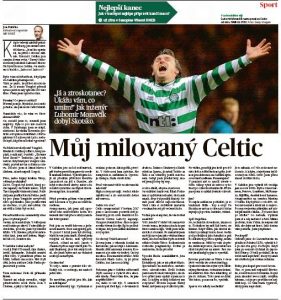 On Larsson, who is now assistant to Ronald Koeman at Barcelona, Moravčík said: “I was just watching Barcelona over the weekend, having fun with Alavés.

“Henrik works as an assistant to coach Koeman and he is getting more and more grey. He was an idol. A phenomenal shooter. The fans said to me: Lubo, you are the prince of Celtic, but Larsson is king.”