Celtic have emerged as one of the candidates for Atlético Madrid’s Rodrigo Riquelme.

This is according to Mundo Deportivo, who state Celtic and Real Betis ‘have already knocked’ on the Spanish club’s door for the 20-year-old.

Wednesday’s edition of the newspaper has a report focusing on the future of three Atlético youngsters, and the winger’s name is included in the list.

The Madrid-born attacker has a year left on his current deal and the report adds the La Liga side ‘want to extend’ his contract.

The player, however, is demanding more minutes with a first team, and according to Mundo, the wideman could be allowed to go out on loan, if he commits his long-term future at Wanda Metropolitano.

That would be good news for Neil Lennon and Celtic interest, and Mundo’s slant makes it sound like there’s a reasonable chance of a deal.

Although Mundo claim teams like Celtic and Betis have ‘already knocked on the door’ for the Spaniard, they don’t make it clear if the intention is a loan or permanent deal. 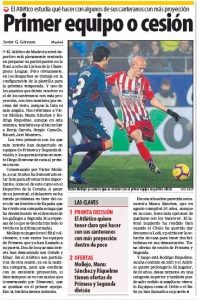 Riquelme made his debut for Los Rojiblancos in their 3-2 defeat against Eibar in September 2019.

Diego Simeone handed the attacker one more opportunity in the first team, and that came in Atlético’s Copa del Rey loss against Cultural Leonesa in January.