Barcelona will face Tottenham Hotspur in the Champions League clash at Wembley after failing to win the last three matches in the league.

It is important for the Spanish champions to bounce back from their recent poor displays when they face the north London club and Catalan newspapers Mundo Deportivo and Sport look at how the visitors could lineup on Wednesday.

Both the publications have come up with the same formation, which is 4-4-2 and have got the same position of the players as well. In-between the posts, there is no surprise as Marc-André ter Stegen retains his place and he will be supported in the defence by a new pairing.

Samuel Umtiti is suspended for the clash and he is also injured, meaning Gerard Pique and summer signing Clement Lenglet will be fielded in the heart of the defence. Jordi Alba is set to retain his place in the left-back position and Nelson Semedo will come in for injured Sergi Roberto on the right side of the back four. 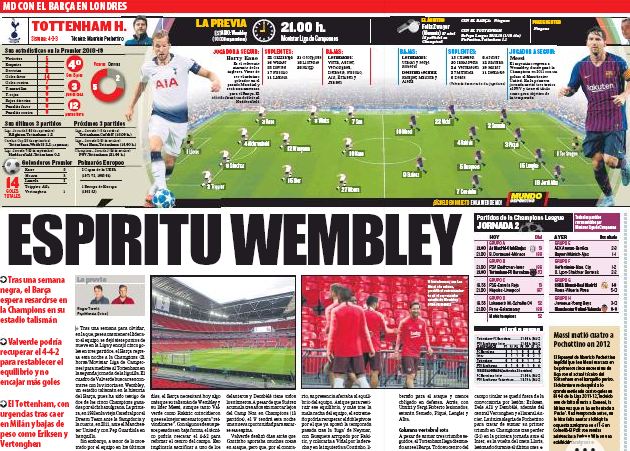 Ousmane Dembele started in his side’s win over PSV Eindhoven and also in seven league games, in which he has scored four goals in these two competitions. The former Athletic Club Bilbao manager will have to sacrifice the Frenchman for the fixture against Spurs in order to accommodate another midfielder, Arturo Vidal.

The Chilean will play on the right side, while Sergio Busquets and Ivan Rakitic will be deployed in the central midfield positions. As per the two reports, Philippe Coutinho will be fielded on the left side with Lionel Messi and Luis Suarez leading the attack from the front. 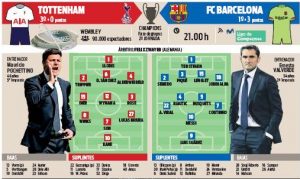 Valverde used this formation after Neymar’s departure from the Camp Nou in 2017 and that has helped him clinch the La Liga and the Copa del Rey last season, but changed things for this season.

He will be hoping reverting back to the old system will help Barcelona to beat Mauricio Pochettino’s side, who are chasing their first win in the Champions League this campaign.