Mundo Deportivo have a story of interest to Liverpool in their Monday edition.

Atletico would be interested in case someone takes Jan Oblak away, and Napoli need to replace Pepe Reina. As for Liverpool, it’s still considered by many that they need a better senior goalkeeper, despite Loris Karius improving recently. 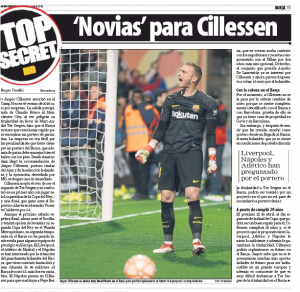 All three clubs have made contact and ‘asked’ for the goalkeeper, but there’s no explanation of exactly what that involves. Liverpool are said to have proposed a ‘project’ to Cillessen and also guaranteed him the starting spot.

Given Jurgen Klopp’s faith in Karius, misplaced or not, it may be hard to believe he feels 29 year old Cillessen is so much better that the Dutchman would be guaranteed to start.

Firmly second choice at Barcelona behind Marc-Andre ter Stegen, Cillessen is hardly going to leave to sit on another club’s bench.