Carlos Carvalhal continues to be a great ambassador for the Championship. Every time he has the chance to speak to the Portuguese press, he’ll praise the league and say it’s one of the most competitive in the world.

Currently enjoying his vacations in his home country, the Sheffield Wednesday boss was present at the Congresso de Periodização Tática in Porto on Thursday, and all of his chat with the local journalists was covered by newspaper A Bola.

Asked about Nuno Espírito Santo, who has just left Porto and will be Wolve’s manager next season, Carvalhal said: “It’s excellent. It proves the quality. He’s a manager who has just done good work at FC Porto, comes from a Champions League dispute and goes to… the Championship.”

Nuno Espírito Santo ended up at Wolves through his close connections with Jorge Mendes, and, like Sheffield Wednesday, the club will be fighting to get to the Premier League next season. 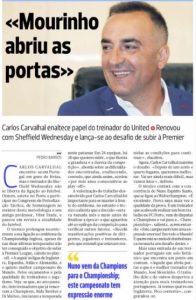 Carvalhal continued: “This league has huge pressure. For everyone. And who’s inside football wouldn’t refuse a challenge like this.

“Following the English, Spanish, Italian and German, it’s the fifth best league in the world. For the budgets and quality of managers and players.

“You see that, last year, two managers who have already won the Champions League, Rafa Benitez and Di Matteo, started the season in this level. From 24 clubs, there are 20 wanting promotion, which shows the greatness and toughness of the competition.”

Carvalhal is now heading to his third season in the Championship. He finished sixth in 2015/16, then fourth in 2016/17. Because of losing both promotion chances in the play-offs, there was even speculation he could be leaving Sheffield Wednesday this summer, but here he goes again for another year.