Over the winter transfer period, scouting of Portuguese matches dropped somewhat, as club officials compiled their reports and clubs considered making January swoops. One of the teams to calm their scouting down was Sheffield Wednesday, but nobody arrived at the club from the Portuguese league last month.

Now, Carlos Carvalhal has got his spies back to work in Portugal, looking ahead to the summer transfer window. Sheffield Wednesday had someone watch the match between Benfica and Nacional at the weekend, which the home side won 3-0.

Jonas and Mitroglou were the scorers for Benfica, with Nelson Semedo putting in a good performance at right back, with Andrija Živković doing likewise on the left wing. 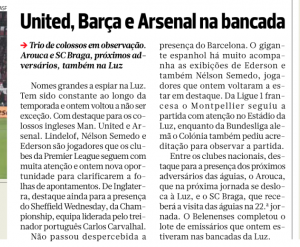 Carvalhal eyeing Benfica players for Sheffield Wednesday would be ambitious. There were claims last week in Portugal that Manchester United have outline agreement on a summer deal to buy Semedo for £35m, which shows that the Lisbon club don’t do things cheaply for their first team players.

As reported by A Bola, joining Sheffield Wednesday at the match were scouts from Barcelona, Manchester United, Arsenal, Motpellier and FC Koln. There’s every chance Sheffield Wednesday were watching a Nacional player, but before Christmas Cavalhal’s club were scouting Benfica repeatedly, it would have to be a fringe player.