Carlo Ancelotti ‘could’ take Hirvin Lozano to Everton this summer as he remains a big fan of the players.

That’s according to Corriere dello Sport, who report on the Mexican forward’s future today and say it looks increasingly likely to be away from Napoli.

Lozano joined Napoli in the summer transfer window in a €34.2m deal from PSV Eindhoven after several years of starring in the Eredivisie and an impressive showing at the World Cup in 2018.

He became Napoli’s most expensive signing when he joined the club, with the Italian side hoping he could kick on and realise his potential to become a star forward.

The opposite has instead happened, with him managing just three goals and an assists in 23 appearances so far.

His situation has worsened since the arrival of Gennaro Gattuso, with him managing just one start and a total of 61 minutes under the Italian.

It is not a great situation and speculation has mounted that the club will look to cut their losses as part of a summer overhaul if he doesn’t improve in the coming months. 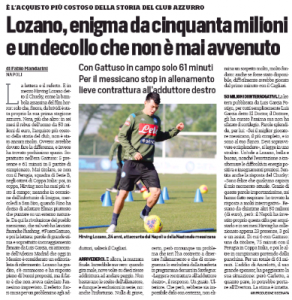 Corriere add to that today and when discussing Lozano’s future say that Ancelotti ‘apparently could take him to Everton’ because the Italian boss still rates the 24-year-old.

Now, the newspaper is not outright saying Everton will make a move, or that they are even interested, more just making reference to claims elsewhere if anything.

However, it is a move that would make sense for all parties involved and it seems very likely that Lozano will be linked with Everton continually as we build up to the summer.