It’s fair to say that just under two months since his arrival at Everton, things are going swimmingly for Carlo Ancelotti.

Having taken over a side facing a relegation battle, he has quickly turned fortunes around, turning the Blues into a team battling for Europe.

Indeed, Everton now find themselves sitting five points outside the top four, and only Liverpool have picked up more points since his first game in charge against Burnley on December 26th.

It’s been a move that’s worked out well so far, with Ancelotti quickly repairing his reputation, which had taken something of a battering during his second season in charge at Napoli.

Ancelotti is undoubtedly enjoying things, admitting that he has quickly found himself at home in Liverpool.

“It’s an informal city. It’s not big, the people are friendly,” he told Corriere della Sera.

“I get on well because I don’t like formal cities. London and Paris offer more choice for things to do, of course. But in Liverpool, like in Madrid, you don’t have to dress up for dinner.

“If one is used to Italian football, one finds another world. I’m not talking about the intensity of the game, that’s not what makes the difference.

“There’s a different environment here. In England, you’re not offended, for example. The abuse is annoying.

“In some Italian stadiums, you get the impression that people hate you, maybe because you changed teams. A guy sits behind the bench and vomits on you for 90 minutes. Here, it’s unthinkable.”

Despite the disappointment at Napoli, Everton did not hesitate to hire Ancelotti when the opportunity presented itself.

Having sacked Marco Silva on December 6th, they wasted no time in moving for the Italian when he left Napoli on December 10th and had a deal wrapped up by December 21st.

It was a turnaround that suited Ancelotti, who admits he did not want to be sitting out of work and picking up a paycheque from his former club.

“I went to Naples because, after nine years abroad, I wanted to come back to Italy and Naples seemed to me an interesting place…

“Let’s say it didn’t end well, but it was a good experience. Living in Naples is one of the best things that can happen. Then a little bit for the results, a little bit for other difficulties, the relationship ended.

“I was dismissed on December 12th, Everton sacked their coach at the beginning of December, things have combined. Coincidences.

“I didn’t feel like sitting still and getting paid without working. Coaching in England is fascinating, and Everton are ambitious.” 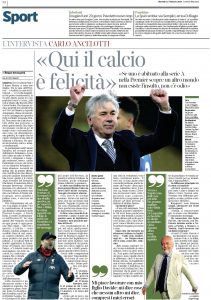 Unfortunately for Ancelotti, he arrives at Everton when the focus of the world is very much on the team across Stanley Park.

Sitting top of the Premier League and clear by 22 points, European and world champions, there is little argument they are currently the best side around.

It’s something that’s only helped to fan the flames of a fierce rivalry between Everton and Liverpool, although Ancelotti sees it as one that is based solely in the sporting world admitting he has a ‘great’ relationship with Jürgen Klopp.

“Like in Milan between Milan and Inter. No hate. No real geographical, social, political or religious differences between the fans.

“It’s (his relationship with Klopp) great, we already knew each other. The same with Mourinho. We send each other messages.”