Jurgen Klopp’s ability to gather ‘top specialists’ around him at Liverpool is a skill that cannot be overestimated.

That’s according to former German international turned director Matthias Sammer, who has praised the Liverpool boss to SportBILD today.

Klopp is enjoying another season of success at Anfield, having secured the Carabao Cup and FA Cup already, as well as taking their Premier League title challenge to the final day of the season.

The Reds have also made it to the Champions League final, where they are set to take on Real Madrid to try and win their seventh title overall.

A third trophy this season would take Klopp to seven trophies since his arrival in England, and a second European title following Liverpool’s success in 2019.

The German coach is undoubtedly one of the best managers in the game, with his success on Merseyside following his time at Borussia Dortmund, where he won two Bundesliga titles, the DFB-Pokal and the DFL-Supercup twice. 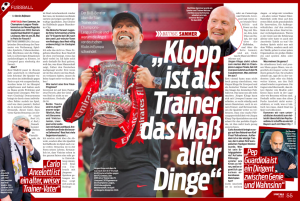 Those successes have been built on getting the best out of every single player, but Sammer believes Klopp’s best skill is his ability to build up an expert support network.

“First of all, you can’t overestimate what Jurgen Klopp is doing for Liverpool and, as a German coach, for the image of German soccer,” he told the newspaper.

“That can make us all proud. Klopp can always reinvent himself with Liverpool; he is constantly looking for new building blocks, also in his coaching and support staff, to further improve the quality.

“The fact that a strong leader like Jurgen Klopp gathers top specialists around him for the perfect result cannot be credited to him highly enough.”