Home Europe “Can you imagine waking up in Liverpool?” – Club owner with strange...
SHARE

Readying themselves to face Paris Saint-Germain in the Champions League, Napoli are currently in the French capital, which means so is Aurelio de Laurentiis.

Beating Liverpool in their most recent outing in the competition, the Serie A side are full of confidence they can pull off another upset, this time against Thomas Tuchel’s side.

Sitting down with Le Parisien, the Napoli president discussed a number of topics, including the recent claims of match fixing in the Paris Saint-Germain – Red Star game, but the main subject was Edinson Cavani.

The Uruguayan striker has suffered a dip in his form, which has led to a number of stories suggesting a return to Naples would be best for him at this point in his career, which De Laurentiis doesn’t disagree with. 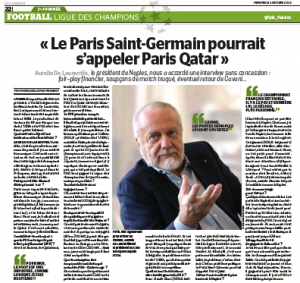 He said: “You’d have to be crazy not to be happy in Naples. At home, I have the best view of Rome, but I’d always swap it for that of Naples, just like my house in Los Angeles. These kids (the players) have to wake up, train and they’re done for the day. We pay them to have fun.

“They also have the freedom of living in an idyllic situation. Can you imagine waking up every day in Liverpool? You only have the house of the Beatles, Abbey Road… In Paris, there’s loads of things to see, but the climate isn’t great like in Naples.”

Perhaps De Laurentiis has missed the point of what players look for when they choose a club to ply their trade in.

Sure, the weather is a bonus, but surely money, quality of the squad, chances of playing and strength of the league (in no particular order) are far more important, and that’s perhaps why Mohamed Salah chose Liverpool over a stay in Rome.

Or the reason Jürgen Klopp turned down all the other jobs offered to him to wake up in grey and miserable Liverpool in the north of England instead of choosing a more exotic destination?