Struggling to convince any of the Leicester managers that followed Claudio Ranieri, Islam Slimani looked destined for a permanent exit this summer.

Brendan Rodgers’ acquisition of Ayoze Pérez and his trust in Jamie Vardy meant there would be no place for the Algeria international at King Power Stadium, so an exit was planned.

However, no one seemed prepare to take a big gamble on the experienced target man, as Monaco came forward with an alternative solution of a loan with an option to buy.

This was enough to convince Leicester to agree to a deal, and Slimani headed to the principality, where he reunited with his former manager at Sporting CP, Leonardo Jardim.

Since then, the forward has gone from strength to strength, scoring three goals and assisting once in his first four games, the latest contribution being the final pass to set up Wissam Ben Yedder in a 3-1 win over Nice on Tuesday.

His great start to the campaign hasn’t gone unnoticed, and local newspaper Nice-Matin dedicate a whole page to the Algerian in their Thursday edition. 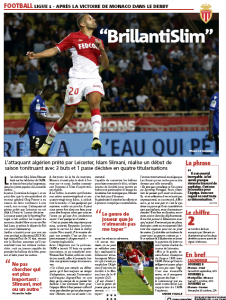 Among many comments from his teammates and those close to him, the most impressive came from former France international Luc Sonor, who also spent nine years at Monaco during his 21-year career.

He said: “I don’t know if it’s the system or because he’s a starter, but he’s amazing for Monaco! He’s great at holding the ball up, laying it off and the vision in his movements. He reminds me of Klinsmann, with whom I played.

“He never stands still, is constantly moving, making space for himself and others. It must be great to play with a guy like him. I would keep him, because he’s intelligent and will know how to adapt his game as he ages. He’s a great find and will always score goals”.