The London club are perhaps the Premier League side being most linked with the Welshman at the moment, taking their turn after the likes of Everton, West Ham and Newcastle United.

According to the Italian newspaper, there’s been a ‘call from Patrick Vieira’ to take the former Arsenal midfielder to Crystal Palace in the January window.

For the Eagles, the issues will be the same as for all the other clubs who have been interested. Whilst Juventus are very keen on the player leaving, and could agree to a free transfer, Ramsey hasn’t shown willingness to reduce his huge salary.

He has tax advantages in the Italian system, so for him to take home the same amount of money he does in Turin right now, an English club would have to pay even more. 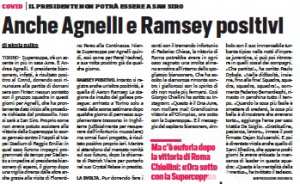 On top of that, Juventus announced on Tuesday that Ramsey has tested positive for Covid-19, which will further complicate any move.

TuttoJuve have covered the Corriere dello Sport report and they say it showed ‘Optimism about Ramsey’s move to Crystal Palace’.

We can’t see anything to justify that, other than them perhaps confusing ‘RAMSEY POSITIVO’ to mean something other than the result of his Covid-19 test.