Championship side Charlton Athletic could be bought by a Portuguese group, according to reports on Thursday.

The outlet has managed to interview Fernando Côrte-Real, one of the group partners, to give more details on their plans for the club.

“CFO Portugal has been in existence for at least five years and provides consultancy in the area of strategic, financial and international management, and now it’s opened up this range for sports,” he told Record.

“It’s a club with a lot of history and extraordinary fans. The goal is to get Charlton back in the Premier League in five years.” 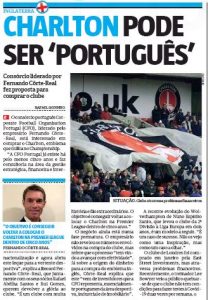 Record writes that the process is still in a ‘premature stage’, although the businessman says it’s been “advancing effectively”.

Asked about the origin of that money, Fernando Côrte-Real has explained that it “comes from investors that the CFO represents, essentially Portuguese in the sports, industrial and real estate areas”.

Regarding the Charlton takeover made by East Street Investments at the start of the year, Record points out that the club are going through a financial crisis, and manager Lee Bowyer has recently made it public that they couldn’t test everyone for Covid-19 twice a week.

The English club with biggest influence from Portugal is Wolverhampton Wanderers, who count on players, manager and even a super agent from the country. Côrte-Real says: “It’s a case of success. I don’t see them as an inspiration, but as a case to look at.”