Charlton Athletic’s takeover bid continues to have big coverage in the Portuguese press, since it’s a local group who’ve been trying to take charge of the London side.

A Bola says the businessman didn’t want to reveal how much they’re offering to buy the Championship side, as the offer is still being analysed. Still, he’s given some details on his plans for the club.

“We want to look at football with a balance between sports management and financial management,” he told A Bola.

“In companies there is great rigour and control, and sometimes, in football, things are not quite like that. It’s a very simple idea, without any magic wand. We want to do things well and those who now work at the club can continue with us.”

Despite having planned to get promotion to the Premier League within five years, it doesn’t look like he plans to make big signings for the club for now.

“Our logic is to build from the bottom up, and Charlton have a strong academy, which, we believe, can be a smart way to balance the team and reduce the need for investment. The idea isn’t to arrive and win soon. We want to build something realistically.” 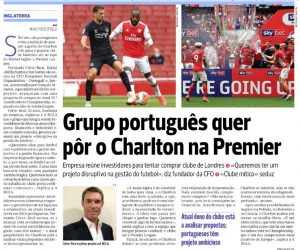 Corte-Real is joined by his partners Rafael Abelha Santos and Rui Gomes in this process, and they all have the advisory of Gonçalo Almeida.

Regarding the possibility of a relegation to the League One this season, Corte-Real said: “It wouldn’t be irrelevant, as it would have financial consequences. We believe that Charlton will stay up, but if they don’t, we’ll have a different approach, with a deeper restructuring.”

It’s claimed that the group has also thought of buying clubs from Croatia, Romania and Poland, but ended up choosing Charlton.

“It’s a mythical club, has a membership basis like not many other sides, and they’re in the Championship, which is one of the most attractive championships in Europe.”