Hart will become a free agent at the end of the season, and he’s expected to leave Turf Moor following his time as back up to Nick Pope.

Fanatik claim his contract situation is making him an ‘appealing’ target for Besiktas, and they could sign him on a free to replace Loris Karius, who will return to Liverpool once his loan spell in Istanbul comes to an end.

It’s stated that Hart wants a three-year deal with a yearly wage of €2m, and his agent reportedly said the 32 year old won’t want any signing-on fee if he completes his move to Besiktas. The Super Lig side can now open talks with the player with regards to a pre-contract agreement 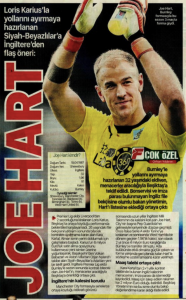 The former Manchester City goalkeeper was linked with a move to fellow Super Lig side Genclerbirligi during the winter transfer window but the Ankara club went on to sign Swansea City’s Kristoffer Nordfelt.

Hart has yet to feature in the Premier League for Sean Dyche’s side this season, with all three appearances coming in the cup competitions.