With Burnley not getting mentioned in the Portuguese media very often, we get to see an interesting piece about a potential transfer today.

According to newspaper Jornal de Notícias, the Clarets are interested in the signing of Benfica centre-forward Haris Seferovic.

As you can see in the image below, the information is brought in a ridiculously short story, which only claims that Burnley are along with Turkish side Fernerbahce in the race.

Jornal de Notícias doesn’t even say how likely the transfer is, or how much Benfica would demand for the move, despite pointing out that Seferovic has a contract with the Eagles running until 2024. 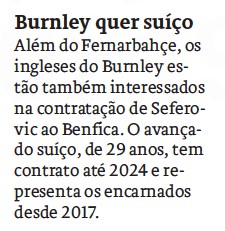 The Swiss international has been struggling with injuries a little this season, and that’s why he’s only managed to make 12 appearances so far. That doesn’t mean he’s lost his ability to score, as he has five goals and three assists in his few minutes played.

Seferovic is currently valued by Transfermarkt at €14m, although we all know how Benfica deal with sales, especially in January, and should certainly demand more for the 29-year-old.