Leon Goretzka signed a new contract with Bayern Munich earlier this month, putting his signature to a deal which will see him continue with the Bundesliga club until June 2026.

For the 26-year-old, that’s the prime years of his career tied up, and before committing he naturally wanted to consider all his options.

There were repeat claims of Manchester United interest in the midfielder, although at times it felt like the Premier League club were being used to put pressure on Bayern to give Goretzka the level of deal he was looking for.

Such claims continued in Germany for months, where the media was absolutely insistent on interest from Old Trafford being real. SportBild have now spoken to the player and asked him directly about Manchester United and Real Madrid wanting him.

They also wanted to know if he really came close to leaving Bayern, and Goretzka told them: “It’s an exciting thing when other clubs recognise what you’ve done. I take a lot of time in my decisions when I need to make them. I weigh up everything. I talked a lot about it with Joshua (Kimmich). We actually had a vision from the start: Our work at Bayern is not finished yet, big things are still waiting for us. Hence the aim was to reach an agreement.” 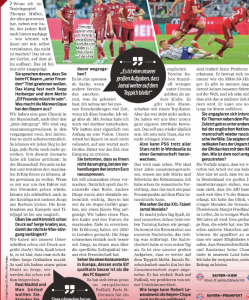 The Germany international didn’t deny the interest, and didn’t explicitly confirm it either, however, it’s clear he’s quite happy his name was associated with the likes of Manchester United and Real Madrid.