Denis Zakaria moved from Young Boys to Borussia Monchengladbach in June, but not before being linked with his fair share of Premier League clubs.

Liverpool, Tottenham, Southampton and Manchester City were all linked with the midfielder at some point, and Gladbach didn’t have it all their own way.

Speaking to German magazine SportBild, Zakaria has been asked about interest from Arsenal and Liverpool and explained why he didn’t choose to join either club: “My consultant had contact with these clubs, but I never met with one of their coaches. I chose Gladbach because they were the most concerned about me.

“They wanted me 100 percent, so I wanted to go here and not to Liverpool. If you go to England and you are not immediately good, you are immediately outside. It was too early for me.”

The 20 year old probably has a good point, Gladbach have been good at developing midfielders in recent years, and Premier League pressure could have been too much for the player.

Arsenal and Liverpool are very attractive options, but the Bundesliga provides 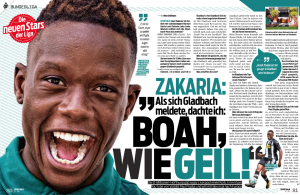 something of a halfway house between Swiss football and the madness of the Premier League.

Zakaria himself spoke to SportBild about Granit Xhaka’s development, and whilst English football may not be for the youngster just yet, in the future it could be different.