PSG beat Marseille 3-1 on Sunday evening, in the French club’s first home match since they lost by the same scoreline to Manchester United.

The Champions League exit continues to be the subject of rumours and stories in the French media, and Mario Balotelli was involved in the latest.

It was claimed on Sunday that, under his Marseille shirt, Balotelli had been wearing a t-shirt with the image of Marcus Rashford on it.

The idea would be that had he scored, he’d have pulled the Marseille shirt off to reveal the face of the Manchester United player, and send the home fans into a complete meltdown.

A funny story, it didn’t feel true when it started, but of course ended up all over social media… because retweets. 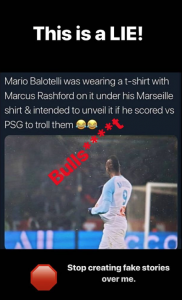 Well, Balotelli isn’t very happy, and via an Instagram story, he’s made it clear the story is false.

Declaring the claims ‘Bull****’, he’s made a request for people to stop spreading fake news about him.