The outlet claims Bruno Lage wants to sort his defence ‘quickly’, as following the departure of Romain Saïss, the club see the Portuguese player as the ‘perfect alternative’ due to his similar characteristics.

However, it won’t be easy to take Inácio out of Sporting, first because manager Ruben Amorim counts on him for next season, and then there’s also the protection from his most recent contract, which includes a €45m release clause.

O Jogo writes that Wolves have up to €30m to offer for the defender, and it’s still not clear if that’d be enough to convince the Lions. 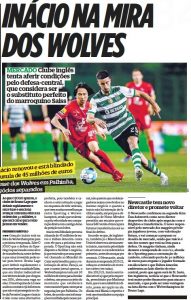 The newspaper points out that those €30m would be a good amount to start negotiating for João Palhinha, another Sporting player who Wolves have been interested in.

Still, they also point out that the Lions are not interested in making it a double deal, as they’d rather work on separate cases. Even because Inácio is a player who won’t have his departure facilitated, while Palhinha is more likely to be negotiated.