Sporting beat Vitoria Setubal on Saturday in what was a controversial match. Bruno Fernandes scored two goals in a 3-1 victory yet said afterwards he thought his team could have done better.

That’s likely at least partly because of the players Setubal had missing due to a virus. They wanted the match postponed, and Sporting’s refusal was met with fury from officials and supporters of the defeated club.

The other main talking point around the match was whether it could be Bruno Fernandes’ last before a move to Manchester United.

Portuguese newspapers are full of headlines like ‘Bruno Anti-Virus’ and ‘Bruno Immune to Virus’. He was Man of the Match, and United had an official in the stands watching, reports Record.

There’s a suggestion of that being significant from a couple of outlets, however, it may not be. Manchester United often have someone at Sporting matches and have done for years, so the official probably wasn’t there to help Bruno pack his bags.

Record also say the Premier League club are ‘close’ to the signing, which will bring a cash boost for Sporting. The final fee is expected to be something like €60m plus around €10m in potential bonuses.

O Jogo have a similar slant. 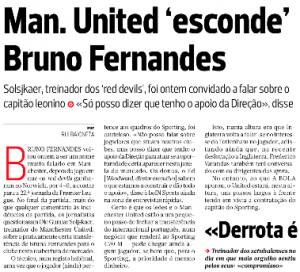 A Bola report United are a ‘short step’ from the signing. The €70m figure is again used and whilst it’s stated the possibility of including a player isn’t excluded, it’s made clear Sporting prefer cash.

This isn’t explained, but is worth saying: Adding players in who have different agents can often be a complication and delay a deal getting over the line. Several negotiations go on at once, each impacting the other, and often the agent of the player being used as part-payment will try and drag every concession they can get out of the situation.

A Bola also note the claims from England of Tottenham moving back into the picture. They don’t add anything on this, and don’t make an effort to confirm, saying United are a ‘few steps ahead’ anyway.

Correio da Manhã, as ever, try to go a step further. They state Bruno Fernandes is due in Manchester early next week after ‘significant progress’ was made in negotiations. 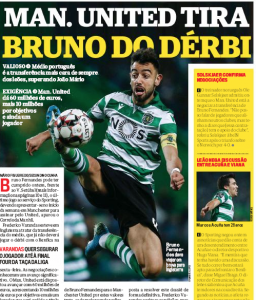 Bruno may well turn up soon, but it’s unlikely they have the inside track on that, having stood out in Portugal for some of their sensationalist claims in the summer.

Despite claims of Portugal’s TVI24 saying the only reason the deal wasn’t announced on Saturday is because both teams were playing, that isn’t on their website and hasn’t been covered anywhere in the country.