Bruno Fernandes had a run-in with the police on Tuesday evening.

In injury time of Sporting’s match against SC Braga, which ended in a 2-1 loss (with an assist from Bruno, naturally), and after Jérémy Mathieu was shown a red card, it all kicked off on the sidelines, and the Manchester United target was seen remonstrating with a police officer.

Anyway, back to transfer talk. It’s very positive from A Bola, who say the transfer ‘may be closed today’, after another round of negotiations took place.

To be clear, they certainly haven’t been saying that every day. To be clear again, by ‘closed’ they mean agreed, so don’t be camping outside The Lowry waiting for your Portuguese saviour.

Sporting and Manchester United are ‘getting closer to the final understanding’, with the Premier League ‘already informing’ the Lisbon side they’re ready to reach €55m plus a further €10m in bonus payments. 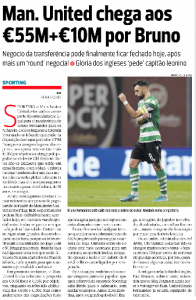 These figures are ‘on the table’, and A Bola adds: ‘Still with some rough edges to be made regarding the payment terms by Manchester United to Sporting, all the details can be definitely settled today, in yet another negotiating round between all parties where everything can be sealed.’

All of this is with the assumption the bonus payments offered this time will be achievable.

It’s also stated everything is sorted out between Bruno and Manchester United on personal terms. That’s no surprise, United may be trying to pull their transfer budget back, but when it comes to wages they’re hardly going to fail to impress a Sporting player.

Record don’t have much on the subject, concentrating instead on Sporting’s loss and the subsequent kick-off. Manchester United had a scout at the match, but that was always going to be the case, regardless of Bruno-gate.

The same goes for O Jogo.

So, if you want to take A Bola’s word for it, it’s a positive Wednesday on Bruno Fernandes to Manchester United.