Rarely does a transfer saga which has lasted just over a week, in its latest incarnation anyway, become as messy as Bruno Fernandes to Manchester United currently is.

As the Premier League club’s PR push got into full swing over the past couple of days, there were also reports from Portugal, although it’s fair to say the media there are becoming a little bored of it all. Relatively, anyway.

For example. Saturday’s edition of A Bola barely covered it. Record and O Jogo did, with the latter producing a report which was more like a narrative, flip-flopping from one position to another.

Record said, according to their own information, that United were ‘willing’ to raise their offer to €60m (presumably fixed) plus €5m (presumably bonuses).

Today’s edition of Record has a relatively small piece on the situation. They report agreement hasn’t been reached, but it’s ‘not so far away’. A first offer of €50m plus €10m in bonuses is said to have been rejected, however, United gave the sign they could then raise that to €60m plus €5m in bonuses just before the match against Benfica.

It’s not made explicit, but it doesn’t seem like that has been turned into a real offer yet, just talk, although it’s expected. Once again it’s worth noting that there seems a hang-up in Portugal on the description of official offers, with a big difference given to verbal and written.

O Jogo, just like Record, report both sides are being stubborn. They say there’s a €10m difference between he clubs. 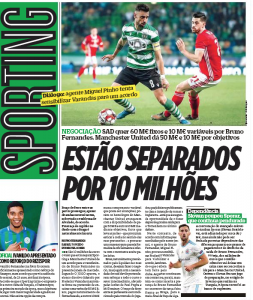 Sporting president Fredercio Varandas ‘remains firm’ in wanting €60m guaranteed, which can ‘naturally’ be paid in stages, and a further €10m achievable bonus.

Manchester United are presented as wanting to pay €50m plus a further €10m in bonuses, a claim with matches with what Record say about the first offer.

Miguel Pinho, Bruno’s direct agent, is said to be working to pressure Varandas, using the player’s service to the club as a reason not to stop his dream move to the Premier League.

A Bola have a different slant, but agree there’s problems, showing a frustrated Bruno holding his face.

There’s no understanding between the clubs when it comes to details.

It’s claimed that in the first phase of talks, the €70m headline figure was agreed, with the loan of a player. The loan idea was shelved because the players who Sporting fancied weren’t keen on the move, and the ones who were keen weren’t fancied.

The second idea from Manchester United, according to A Bola, was a €60m fee plus €10m in bonuses, but it’s thought those bonuses weren’t realistically achievable.

It’s not stated today, but it has been suggested previously in Portugal that the bonuses related to United winning the Premier League, Champions League, and Bruno picking up the Ballon d’Or. 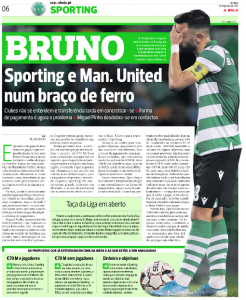 A Bola state Sporting want as much money as possible at the outset, with €65m plus €5m presented as a solution. They then report the following: ‘Also under discussion was the English idea of paying €50m already and the remaining €20m later, or even €50m, plus €10m, plus €10m, but here, with easily attainable objectives.’

But, to be clear, the suggestions of Sporting asking for €80m and more seem wide of the mark.