Over the past week or so, the Portuguese slant on Bruno Fernandes has had something of a routine.

Each morning the newspapers would be relatively positive, but at the same time make it clear there’s no agreement between Manchester United and Sporting, and then in the evening TVI24 would come and throw a negative slant on things.

That feels like it’s continuing, although now the newspapers don’t seem quite so positive.

In their Saturday edition, A Bola sound like they’ve had enough.

Claims are covered of Manchester United not wanting to guarantee more than €50m because of a clause in Bruno’s contract (something we explained yesterday), and the two sides are still trying to get the other to compromise.

The situation has ‘cooled’, but it’s made clear negotiations continue.

Record are a little more positive, they say Sporting manager Silas has made plans for Monday’s match against Maritimo with and without his star midfielder. 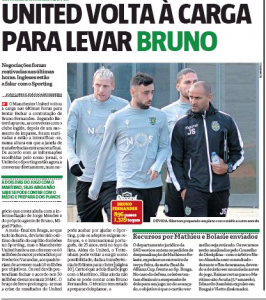 been ‘reactivated’ and are ‘intensifying’, but it doesn’t feel like there’s been any concrete step forward.

The clubs are talking directly, with each trying to get the other to bend.

O Jogo say Sporting had expected the transfer to be done by now, but Manchester United’s ‘intransigence’ has delayed things.

They state that despite the Premier League club saying they’d increase their €50m offer, this hasn’t happened officially yet.