Sporting beat Maritimo 1-0 on Monday and, according to A Bola, Bruno Fernandes was Man of the Match.

Regarding a potential transfer to Manchester United, the Portuguese newspaper says it’s now ‘the moment of truth’ and that today ‘should prove to be absolutely decisive’.

Once again it’s stated the ball is in Sporting’s court and they need to decide whether to accept United’s latest offer.

That offer hasn’t been made in writing, with this distinction often being pointed out in Portugal, as A Bola explain: ‘In principle, this step would only be made when the Red Devils were absolutely sure that the proposal would be accepted, but the truth is that it may even happen as a way for the English to exert greater pressure on the lions.’ 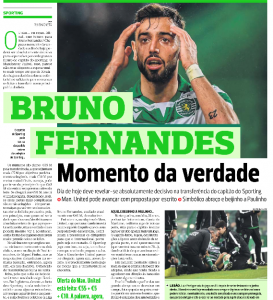 The offer stands at €55m plus €15m in bonuses payments. It’s again stated that €5m of that is easy to achieve and the other €10m not so. In that regard, the offer is being seen as €60m pretty much guaranteed.

Miguel Pinho is mediating, and after negotiations slowed down last week they now enter a ‘decisive phase’.

A Bola also state that given the window closes on Friday, ‘today is expected to bring significant news’.

Record seem bored and just repeat what they said yesterday, about there being no new offer officially made, and A Bola have already covered the reason for that.

O Jogo, who also have Bruno as Man of the Match, say ‘everything indicates’ the transfer is ‘in the process of materialising’, but yesterday there was ‘no white smoke’. 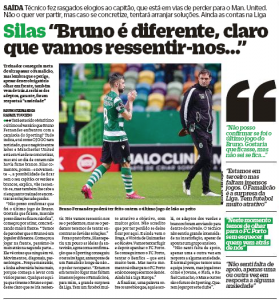 Sporting manager Silas is quoted as saying: “I cannot confirm that it was Bruno’s last game. I would like him to stay, but I can’t say whether he stays or not.

“We have to realise that Bruno is a different player. He sees things that nobody sees. Movements, diagonals, long passes.

“Any team that had Bruno and lost him clearly would be resentful. We will resent it if we lose him; but if we lose him we will have to try to find the right solutions.”