Good Morning, it’s time for another round-up of what the Portuguese media are saying about Bruno Fernandes to Manchester United.

It’s only been a week since they really kicked off the claims, and it should be over in a few days, but it’s still sending United fans into trauma.

A Bola goes with a headline reading ‘The accounts of Bruno’, and it’s looking at where all that lovely money will go. They decide to believe United are paying €70m, and explain that will be split as follows: 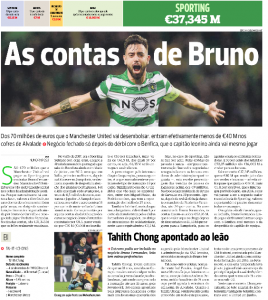 They feel it’s all closing in, stating: ‘The deal is underway, almost closed’

However, it’s again stated Bruno will play against Benfica on Friday as a farewell match.

Tahith Chong is mentioned, but only because his potential move to Lisbon was covered elsewhere yesterday, and they don’t add anything of substance. We covered claims from Portuguese TV on Wednesday evening which explained Chong would be an unlikely transfer.

Record go big on Jorge Mendes, who was in Manchester on Wednesday, and they state: ‘The businessman will now present to Sporting the concrete proposal of the Red Devils for Bruno Fernandes, which could exceed €70m in achievable variables, and should not include any player.’ 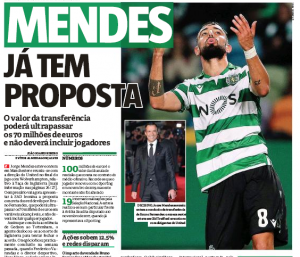 On the Benfica match, they state the ‘assumption’ is that Bruno will play, and then the ‘most likely scenario’ is that his transfer to Manchester United is completed over the weekend.

O Jogo hardly cover it and say there was ‘little news’ ahead of them going to press.

To round it up, it would appear the idea of a loan being part of the deal is slipping away, with United instead getting to that €70m figure (and perhaps past it) with bonuses on top of the €60m guaranteed.

Why would they go past €70m? It could be because the bonuses aren’t as easily achievable as Sporting would like, so therefore a compromise could be reached. Harder bonuses, higher amounts.