Manchester United’s Paul Pogba has been heavily linked with a move to Real Madrid, but no deal has materialised so far.

The midfielder’s brother Mathias Pogba joined fourth division Spanish side CD Manchego at the end of the last month, and that’s given him multiple opportunities to speak to the country’s media.

Paul Pogba has been Zinedine Zidane’s priority target and the Real Madrid manager has publicly expressed his admiration for his compatriot, however, the La Liga side are yet to fulfil their manager’s wish.

Mathias has given an interview to Spanish newspaper AS and expressed his delight over Zidane’s comments about his brother.

“(Breathe) I don’t know what to say… Zidane has always spoken well of my brother, it’s an honour,” he said.

The France international had earlier stressed he wants to leave Old Trafford and this was also publicly communicated by his agent Mino Raiola.

AS asked Mathias if the former Juventus man is unhappy after not getting his move away from United, he said: “No. He’s very well, as always. Let no one expect him to say anything bad about United. He’s a professional and his present is there.

“His future? It depends on the clubs: that Manchester [United] must want to sell and that Madrid wants to buy. That’s business.”

When further quizzed if there is any possibility of Paul joining Real Madrid, Mathias explained: “I don’t know, I’m not inside the Bernabéu. In football you never know… 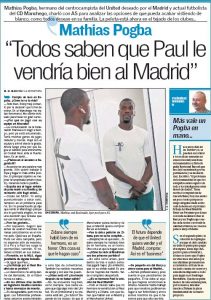 “Everyone knows that my brother could fit Real Madrid and Zidane. Those who have to talk are Madrid and Manchester United.”

It’s the second interview from Mathias in less than two weeks where he has discussed Paul’s possibility of joining Real Madrid.