Bristol City are reportedly working to keep Pedro Pereira at the club.

The Championship side had the right-back on loan from Benfica for the 2019/20 season, and according to Portuguese media today, there are talks for him to stay.

Newspaper Record is the one who says the Robins made an offer for the 22-year-old, but they don’t make it clear if that was for another loan or a permanent transfer.

The clubs are said to be ‘negotiating’ the move, so there should be more updates from the local media soon. 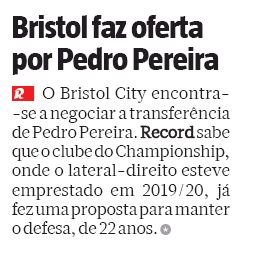 Pedro Pereira made 22 appearances for Bristol City last season, and since he wasn’t a regular starter, it’s hard to imagine the Championship side making a heavy investment on his permanent signing this summer.

However, Benfica don’t seem so keen on keeping him either, since they haven’t used the player in the past five years. He had loan spells at Genoa, Sampdoria and now Bristol City, so a deal to take him out of Lisbon shouldn’t be hard to find.