Benfica’s chase for Almería striker Darwin Núñez has been full of ups and downs in the past few days, with mixed reports regarding the chances of a deal.

As newspaper A Bola explains the situation today, they say that Brighton & Hove Albion may still get a chance to sign the 21-year-old.

It’s said the Seagulls offered €25m for the transfer, and the problem is that the player is more interested in signing for Benfica.

Almeria are said to be pressing the Eagles and claiming that in case they don’t pay the demanded price, then they’d sell Darwin to Brighton, who are still willing to raise their bid and pay up to €30m. 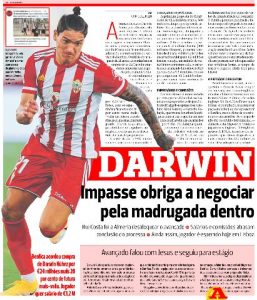 However, Portuguese outlet RTP now reports that the clubs have found a deal this morning, and Darwin Núñez is on his way to Benfica in a €25m deal.

They were followed by other local outlets with similar claims.

So it seems Brighton’s offer wasn’t enough to land the striker, as the Seagulls ended up being used so Benfica would finally match Almería’s demands.