Napoli have turned their attention to defender Nicolo Casale as talks with Brighton & Hove Albion continue to stall over Leo Ostigard.

That’s according to the likes of Corriere dello Sport, Il Mattino and Corriere del Mezzogiorno today, who all say the Italian side are struggling to reach an agreement with Graham Potter and co.

Corriere dello Sport kick things off by saying that the deal has been ‘held back’ by ‘economic complications’ put in play by Brighton.

Corriere del Mezzagiorno are less negative and simply say there is an ‘ongoing negotiation’ between the two clubs for the defender, who is set to pick up a salary of less than €1m per year if he moves to Naples.

Il Mattino, meanwhile, go into more detail, explaining that Casale replaced Ostigard on the list of favourites in the last few days.

That’s because he is available in a ‘low-cost operation’, something the Brighton man ‘suddenly wasn’t’.

They explain that Napoli made it clear to Brighton and their representatives that they have an agreement with Ostigard, but that has not moved things along. 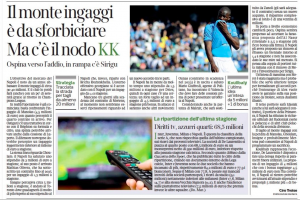 Brighton want a permanent transfer, but this requires both sides to sit down at the negotiating table and thrash out a deal, something they are yet to do.

There’s no mention on there being a difference in valuations, but it seems that is the case, and it’s not working out as cheaply as Napoli had hoped.

That’s left things in limbo, despite Ostigard clearly being keen on the switch and Brighton needing to sell as he’s in the final year of his deal.