A Brighton and West Ham chase for the Benfica striker Haris Seferovic is highlighted by Portuguese newspaper O Jogo today.

The outlet has managed to confirm the news which started in England, saying that now the Premier League is a possible destination for the player in the next season.

Both Brighton and West Ham are reportedly looking for a striker this summer, and now should face the competition from Wolfsburg to sign the 26-year-old.

All these destinations would fit the players’ plans, as he wants to join a top league to continue his career. 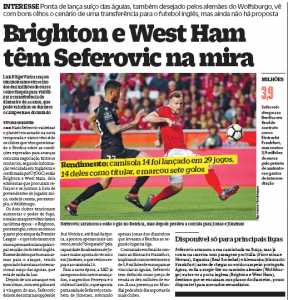 O Jogo claims that no bids have been made for Seferovic yet, although the demands aren’t so big. Benfica are said to have put a €10m price tag on him.

Seferovic signed for Benfica as a free agent last summer, but only managed to score seven goals in his first season for the Eagles. With the club signing two other strikers this month, both him and Raul Jimenez are now expected to leave Lisbon in the summer.

Matheus Nunes had training week with Leicester City – Pieces of...