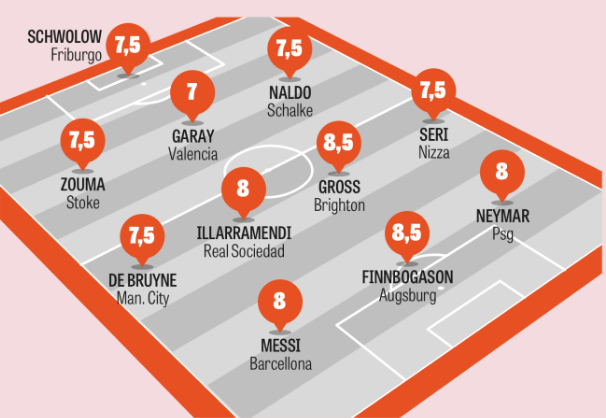 Pascal Gross and Brighton & Hove Albion had a great Saturday.

Brighton, who finished second in the Championship and achieved automatic promotion to the Premier League, notched their first win of the season.

Tony Pulis’ West Brom had enjoyed a good start to the current campaign but were beaten 3-1 away to Brighton, as some firsts were written on the board.

Brighton got their first Premier League win and Pascal Gross got the Seagulls first goal, he then added to that with a second, and Tomer Hemed rounded things off with a third.

Gross has seen his performance recognised by Italian newspaper Gazzetta dello Sport. Every Monday a European Team of the Week is selected, and this time there’s three Premier League players.

The German has been chosen along with Kevin de Bruyne and Kurt Zouma, and no player in the team rated more highly. Lionel Messi and Neymar are both included, but they’re at 8/10, compared to Gross’ 8.5.

Only Alfred Finnbogason rated as highly as Gross, and he scored a hat-trick for Augsburg against FC Koln.