Just yesterday, we covered a piece from Italian newspaper Tuttosport saying Ezequiel Schelotto could be returning to Serie A this summer.

Their report claimed that Benevento and Torino are both interested in the Brighton & Hove Albion player, who’s ‘not happy’ in England.

And following Tuttosport’s comments saying the fullback would prefer the Turin side, Schelotto himself has shown his affection for the club today.

The 31-year-old was interviewed by the newspaper, and since his contract with the Seagulls expires at the end of the season, he made it clear his future is open.

“The goal is to hit salvation, then we’ll see,” Schelotto told Tuttosport.

“The club would like me to stay and I feel very good in England, but during my career I learned not to close any doors. Many clubs have already knocked and I’m going to listen to everyone, Torino in the first place.” 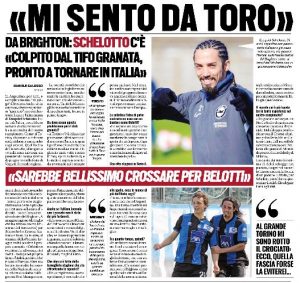 The fullback also made sure to tease a little with a move to the Serie A side, claiming there’s a place where he’d like to be.

“In Turin there is the climate I like: the fans are very hot and in the air you can breathe the scent of a derby that is really fascinating. I’ve played many times against Torino, both in A and B, and the stadium is impressive: as an opponent I’ve always weighed people’s attachment to the team, experiencing these feelings on the other side would be a pleasure.”

Schelotto had a long career in Italy. After leaving Argentine side Banfield in 2008, he played for Cesena, Atalanta, Catania, Inter Milan, Sassuolo, Parma and Chievo.

He left the country in 2015 to join Portuguese side Sporting, and ended up moving to Brighton in 2017, but was back at Chievo on a six-month loan spell in 2019.

During the interview, Schelotto has revealed he still has a house in Italy, hinting he’d like to return someday.