The outlet praises his career in Serie A, and points out that despite signing a two-month extension with the Seagulls, the player should leave the club at the end of the season.

Tuttosport writes that Schelotto ‘isn’t happy’ in England, mostly because he can’t get enough minutes in the Premier League.

They say he’s been contacted by two Italian sides, Torino and Benevento, and it’s the Turin club who’d be his top choice in that case. 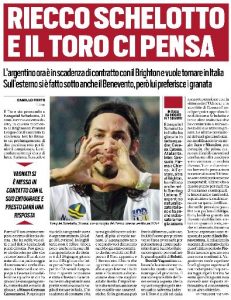 Schelotto has a long career in Italy. After leaving Argentine side Banfield, he played for Serie A clubs Cesena, Atalanta, Catania, Inter Milan, Sassuolo, Parma and Chievo.

He left the country in 2015 to join Sporting, and ended up moving to Brighton in 2017. But he’s made just 32 appearances for the Seagulls since then, and things haven’t been better this season, as he’s only featured in eight games.

That’s why his departure looks obvious, and Italian clubs see the 31-year-old as a good option to be signed for free.