The South Africa international’s failure to obtain a work permit to play for the Seagulls forced them to send him out on loan for the last two seasons.

On June 24th, we covered claims made by Het Laatste Nieuws that the forward has been offered to Royal Antwerp. However, his signing is not a priority for them.

HLN further explained the 26-year-old extending his stay at Brugge is ‘also possible’.

Tau and the Seagulls will again have to look for another club this summer, if Het Belang van Limburg are to be believed. They state the player is still not eligible for a work permit to represent Graham Potter’s side.

Therefore, he has been offered to ‘several teams’, including clubs in Belgium. 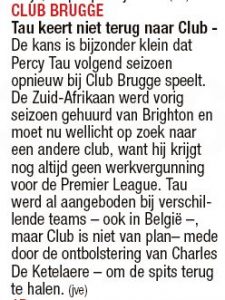 The report doesn’t mention the details of those clubs, but the newspaper claims Brighton owned player will ‘not return’ to Club Brugge.

HBVL also add the Belgian champions have made their intention clear with regards to the player, partly due to the emergence of Charles De Ketelaere this season.