The Argentine press is now sure about two things.

First, Brighton & Hove Albion are signing Alexis Mac Allister from Argentinos Juniors. And second, he’s being loaned out until next summer.

Both claims have been repeated over the past few days, and that’s what we’ve read in a more serious story from newspaper Olé this Thursday.

They say that Brighton will be paying US$8.5m (£6.5m) to sign the midfielder, slightly less than the previous claims of US$10m.

Olé also writes that Mac Allister would only get his EU passport by June, which means he will have to wait a few months before being available for the Seagulls. 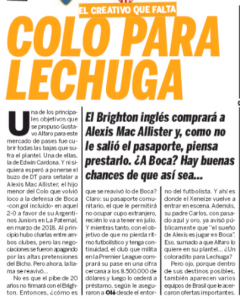 Regarding the loan, Olé’s biggest focus is about Boca Juniors.

It’s claimed that the Buenos Aires side were already interested in the player last year, and now would be happy to take him on a short loan.

However, it’s claimed that many other clubs would like him as well, including some Brazilian sides who already made offers for the player.