The 48-year-old is said to have a statistics algorithm that has helped the Seagulls make it to the top flight competition in England and the same has been used at his new club for recruiting players.

One of the players the Brussels-based side outfit signed in the summer is Youssouf Niakate and Het Laatste Nieuws has a story about the forward following his heroics against Anderlecht on Thursday.

He scored a hat-trick against Hein Vanhaezebrouck’s side in the Belgian Cup and helped Union knock out the second most successful club in the competition. Since making the switch to Stade Joseph Marien the 25-year-old has scored 11 goals in eight appearances and it includes two hat-tricks.

HLN heaps praise on Bloom for unearthing a gem using h=this famed algorithm and the newspaper claims a club may have to table a seven-digit proposal to take the attacker away from his current employer. 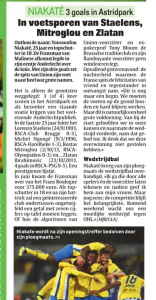 On September 27th, Gazet van Antwerpen had comments from Union sporting director Alex Hayes, who stressed it is important for his side to maintain relationship Brighton as the two clubs are owned by the Englishman.

Therefor, it won’t be a surprise if Niakate gets linked with a move to Brighton, with all the pieces slotting into place.