Barcelona’s Óscar Mingueza has emerged as a transfer target for Brighton & Hove Albion.

Last November, Ronald Koeman promoted the 21-year-old to the first team and he has made 28 appearances [includes 22 starts] in all competitions this season.

The centre-back’s current deal runs down at the end of this season, but the La Liga side have a unilateral option to further extend his contract by two more years.

Mundo Deportivo explain Barca’s new sports management must validate the option to extend the player’s deal until 2023 and that’s why ‘no contacts have yet been established’. The deadline to extend the defender’s deal is May 31st.

At the Camp Nou, there’s unanimity to exercise the option and Mingueza’s desire is also to continue with the Spanish side.

Koeman, however, will have to decide whether or not the Spaniard ‘continues’ to represent the club next season.

Several clubs have ‘already expressed’ to the Blaugrana their ‘desire to have’ Mingueza, either on loan or a transfer. 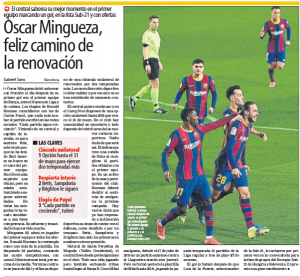 This includes Graham Potter’s side as the Seagulls, along with Real Betis and Sampdoria, are the ‘first ones to sound out’ the Barca defender.

Brighton are one of the three clubs to follow Mingueza and a decision on his stay at Barcelona is likely to be taken soon.