Brighton’s wish to get Alexis Mac Allister in the January transfer window is becoming a serious topic in the Argentine press.

It all started earlier this week, when the Seagulls loanee got his work permit, allowing him to finally feature in the Premier League.

Since then, there’s been claims about the possibility of having his loan spell at Boca Juniors cut short, even though it only seemed like assumptions from the local media.

But according to a report from Argentine newspaper Olé today, Brighton officials are expected to go to Argentina to try and sort the situation with the Buenos Aires side. 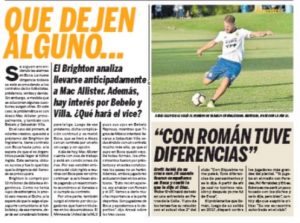 Since the loan spell was supposed to run until June, Brighton would have to agree to pay a fee to take Mac Allister now. And his possible departure is seen as a problem by Boca Juniors’ board.

“We have to chat about everything, this just shows up, I’m going to talk to Roman and the coach. We’re going to give a lot of importance to the sports side,” said club president Jorge Amor Ameal when asked about the subject today.

Mac Allister is thought to want to continue with Boca until the summer, but there have been reports this week that he’s not happy with the wages he’s on.