Home Premier League Brighton Brighton have had offer for striker turned down – Club demanding at...
SHARE

Brighton & Hove Albion have made an attempt for the signing of Braga striker Abel Ruiz, according to claims from the Portuguese media.

Newspaper O Jogo says the offer placed by the Seagulls was ‘immediately’ turned down by the Arsenalistas.

The outlet admits they’re not sure of how much Brighton put on the table, despite knowing that the attempt was ‘very recent and concrete’.

What they do know is that Braga will not accept negotiating the player’s sale for less than €10m, so the bid was presumably smaller than that. 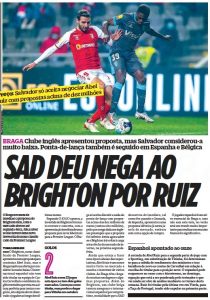 According to O Jogo, it’s still to be seen whether Brighton will return with another offer before the end of the transfer window.

They point out that Ruiz’s season has been ‘below expectations’, but his name is still strong in the market, with Braga receiving several approaches for him.

The striker has two goals and one assist in 22 appearances this season. Last year, he even made his debut for the Spanish national team, having also shined in the U21 Euro qualifiers.