Brighton and Hove Albion striker Neal Maupay says he is “looking forward” to the return of the Premier League after it was officially revived yesterday.

The division has been suspended for the best part of three months, having elected to pause all games while Britain was in the middle of the Coronavirus epidemic.

There has been a determination from the majority of the league to see it return at some point, although several deadlines to do so have already been missed.

However, a phased return plan is now in action, with clubs having recently moved to full contact training once again with the permission of the UK government.

That has seen the league set a return date of June 17th, with teams set to play in a new look schedule to get the season completed as soon as possible.

There has been a somewhat mixed reaction to the news, with some players expressing concern, but Brighton’s Maupay is not one of them.

“For us players, it was difficult to prepare without knowing whether the season would actually be played,” he told L’Equipe.

“I would have been sorry if my first season in the Premier League wasn’t complete.

“Now, I can set myself some end-of-season goals, such as crossing the 10-goal mark and helping my club not to go any lower.”

A return to competitive action will require some getting used to for the majority of footballers, who have been isolating like the rest of us during the pandemic.

Most will be at high risk of injuries due to the return, and the new, compact schedule they are being asked to perform in.

That’s already been seen in the Bundesliga, with several players already coming down with injuries just a week into their return.

This is something the Brighton striker is aware of, admitting that there is no substitute for the “intensity” of real games. 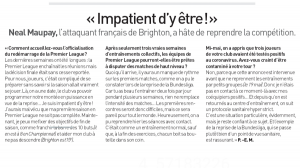 “No matter what happens, there will be a lack of rhythm in the first few games, as we saw when the Bundesliga resumed,” he added.

“You can train twice a day for several weeks, but there’s no substitute for intensity…

“So the first games will be difficult, but it’ll be the same for everyone.

“Fortunately, we were able to resume contact training yesterday.

“It was like normal training, except that at the end of the exercises, everyone drinks their bottle in their corner.”