Now that Moussa Marega has revealed his wish to move from Porto to a Premier League club, the rumours around his future will obviously grow a lot.

Portuguese newspaper A Bola has a story about it today, claiming there’s actually a lot of English sides who would be happy to take the striker.

For now, the outlet only names one of them, which is Brighton & Hove Albion. The Seagulls were reportedly the first to show interest and make contact about signing the 27-year-old.

The problem is that Marega wouldn’t be very keen on changing the Portuguese champions for a club who finished 15th last season. 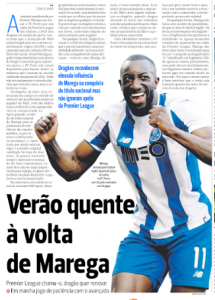 That’s why the player is expected to wait for other offers. A Bola claims that Premier League clubs normally move late in the market, and this is the reason why there’s no rush for a move now.

Marega has a €40m release clause, and that’s the amount Porto would have as a reference if negotiating his sale this summer. The striker, who scored 23 goals last season, has also been linked to the likes of West Ham and Everton this year.

If Brighton interest is genuine, this may be a waiting game.