Brighton & Hove Albion have submitted a formal bid for the signing of Benfica striker Darwin Nunez, according to reports from the Portuguese media.

Newspaper Record writes that the offer was made last Friday, and even though the Eagles are willing to turn it down, there’s still no official answer from the Lisbon side.

Record explains that Benfica are playing the Champions League play-offs in the coming weeks, and in case they get knocked out by Spartak Moscow, that’d make a big difference in this season’s budgets.

Since Brighton’s offer for Darwin is of a good amount, the Eagles will wait and see how they do in the tournament. If they get knocked out, then selling Nunez would cover that money they fail to make. 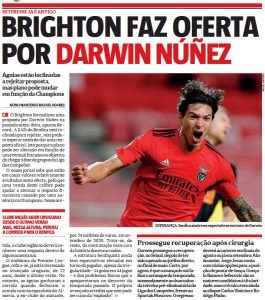 That’s why their response is only coming ‘in a few weeks’, even though it’s not clear how long are Brighton willing to wait for.

Record recalls that the Seagulls’ interest in the striker dates back to last summer, when he still belonged to Almeria.

At that time, Benfica won the race by signing him for €22m.

In his first season in Portugal, Nunez had 14 goals and 12 assists in 44 appearances.