Edmilson Junior left Standard Liege and made a switch to Qatar and joined Al-Duhail SC in July 2018.

During his brief spell in the Middle East, the winger has managed to score four goals in 18 appearances and Belgian newspaper Het Belang van Limburg claims his club are ready to sell him this month.

Al-Duhail have already offered the 24-year-old to several Jupiler Pro League clubs like Gent, Royal Antwerp and Anderlecht, but they turned it down citing the cost as the reason.

This is when the report mentions that Brighton & Hove Albion as they claim the Premier League side are ‘interested’ in Edmilson.

It’s explained the Seagulls have previously looked at players who have played in Belgian to strengthen their squad and José Izquierdo and Mathew Ryan are mentioned as examples.

With Chris Hughton’s side interested in the wideman and with Al-Duhail willing to sanction his sale, it looks like a deal is possible. 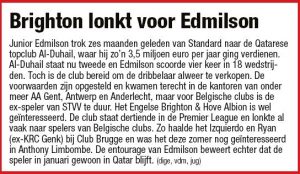 However, Edmilson’s agent thinks otherwise, and claims his client will continue with his current employer in January.