Brighton & Hove Albion defender Bruno Saltor Grau, simply known as Bruno, became the latest footballer to join hands with Common Goal, for who he will pledge at least one percent of salary to charity.

The right-back has been with the East Sussex club since 2012, where he is also part of his current side’s charity department, Albion In The Community.

Chris Hughton’s side signed Martín Montoya from Valencia in the summer transfer window and the 27-year-old has been preferred ahead of his compatriot in the fullback position.

Sport has a report about the Seagulls defender in today’s edition of the newspaper and the 37-year-old, whose contract expires in 2019, was asked how long will he be able to extend his playing career and how he sees things going.

Bruno said, “I do not know. I just try to enjoy every day, every training session, every game, because I know it could be the last [season].”

The Spaniard has also informed by Brighton that he will have a role at the club after he retires from football and the player explained why it’s difficult for him to leave England. 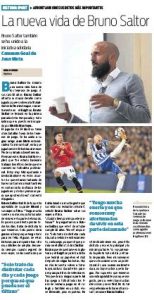